We found dinosaurs in Singapore! These days my son is really attached to Peppa Pig episodes and there is one episode about visit to a dinosaur park. (Grampy Rabbits Dinosaur Park). Other than that he himself introduces as ‘George’ who is younger brother of Peppa pig. Dinosaur is Gorge’s favourite toy. 🙂

Well, our home is with bit of Pappa pig madness these days. Although I control screen time and addicting to same thing, I also encourage him to learn new things with fun. One day when it was a holiday for my son’s Playgroup, he told me he wants to see a Dinosaur!

I actually was planning to go out with him but I also didn’t have any special place to visit. With his request and when I searched for dinosaurs in Singapore, I found few places including museum, science center and exhibitions. But for a toddler, it seems these places are not much attractive. Then I found this dinosaur park which is located in Woodlands, Singapore.

It is Fu Shan Garden, located at street 81, Woodlands which is an old playground between HDB blocks. This playground looks dry but there are also huge trees around it making it a cool place.

Although it is not suitable for playing with dinosaur slides in the playground, it is really a good place to show dinosaurs for kids.(Specially for young kids and toddlers)

This Singapore dinosaur playground is with slides which feature dinosaurs and Ouranosaurus. My little explorer was so happy because I took him to spend his day with dinosaurs.

The playground and complete surrounding of Fu Shan Garden is located in a small hilly area. So the landscape is according to the natural place by making different levels. There are some boulders which help to climb the hill to the top of the garden.

As this is not a much popular place, there were no other people. So, we both had our time among the dinosaurs and it was really fun.

In this Fu Shan Garden,there is also a wall which feature different dinosaurs.

For my son it was like a hike to a big mountain! 🙂 He had great time exploring the surrounding and the dinosaurs!

Are we in Jurassic park Singapore? 🙂 We found many dinosaurs!

Here is my happy little explorer at the Fu Shan Garden,Dinosaurs playground! 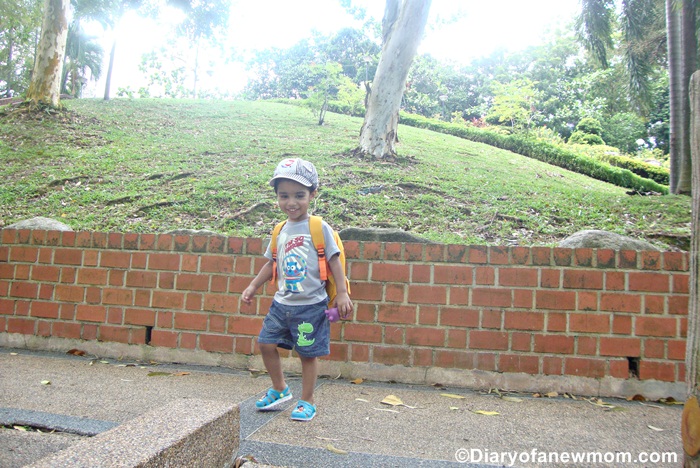 Do you have any photo story for this week? Please share.

Nights Out and Phases of the Moon with My Toddler
Gakken Go Go Series Workbooks - Review + Giveaway
How to Choose the Best Toothpaste for Toddlers and Kids
HooplaKidz Nursery Rhyme Activities Review + Giveaway!